January 15, 2020
On January 13, in honor of Kid Inventors Day, January 17 (also Benjamin Franklin’s birthday), the California Invention Convention went to the State Capitol Building in Sacramento to meet with our Assembly Members and Senators to introduce them to Invention Education. 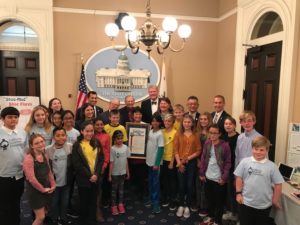 The day began with 23 of our student-inventors setting up their inventions in one of the legislative rooms of the Capitol.  Reporters from the local Fox News TV station met did several spots for their morning shows of the students and their inventions, and interviewed Executive Director Brenda Payne.  The students and their families were then taken on a VIP Tour of the Capitol before heading back to meet and talk with their state Assembly Members and Senators about their inventions.
We were all delightfully surprised when Assembly member Mark Stone had all the legislators in the room come together to present us with a Resolution from the Legislature, declaring that the California Invention Convention be commended for its inspiring and consequential efforts to ensure that invention education and its many beneficial outcomes are available to all K-12 students throughout California and extended best wishes for the abiding success of its efforts.
Students then attended the Assembly legislative session where all were recognized by the members.
Each of the students received beautiful certificates from each of their Senators and Assembly Members recognizing them, individually for their efforts! 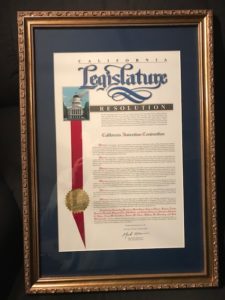 It was an extraordinary day for all who attended!